Bit of background, where you live, what you do for a living:

I live back in Coventry now after being in London for many years. After doing a Post Grad in Broadcast Journalism, I worked for Global Radio. I have been at the BBC for nearly ten years now, I’m a Presenter and Reporter at BBC CWR which covers Coventry and Warwickshire. I’ve done a bit of TV reporting, but my passion is radio (and I have the face for it!).

I love my job and I made the decision to go back to University in my early 30s to do my Post Grad and switch careers totally to Journalism. It was a gamble which so far has luckily paid off! My job is so varied and no two days, no two hours are the same! I could be grilling an MP one minute about HS2 (High Speed Rail), then the next minute speaking to a war veteran who flew missions in the D-Day landings! You hear some amazing stories doing this job some happy, some sad, my job is to tell the story on air or ask the questions people are shouting at the radio when holding someone to account. I also get to present sport sometimes which is great for me, I was never good enough to play sport professionally, so to report on it is the next best thing. Outside work I’m a season ticket holder at Coventry City and I play golf really, really badly!

When were you at Princethorpe?

1986 – 1990, I remember my very first day as I had broken my arm in the summer so had a cast on. My late cousin Alex (Bri as he was known ) Chapman had already been there a year so I settled in pretty quickly. Mr White was my first form teacher in B2.

It was all boys in my day apart from Sixth Form, and they had boarders, I was a 'Day Boy'! I just remember thinking how big it was, my middle school was tiny. One memory I have is all the bags that would line the main hall at lunchtimes, a long line of 'Head' bags as that was the bag to have then, we would play football every lunchtime in the Orchard. I did a lot of running, so I remember the Mile Walk well!

How did Princethorpe affect the person you are today?

I think it taught me that you can be what you want to be, but nothing comes easy in life. I recently interviewed Gwil (Mr Price) about the retirement of Ian Bell, Mr Price always wanted you to do well, and gave great encouragement, to speak to him again after 30 years was a joy, and he remembered me! But the great thing is I think he remembers every pupil he taught and that is what is so special.

What advice would you give to your teenage self?

Listen to my English teacher Mr Weir, he would regularly say “Richard if talking was a job you could do it for a living!,” he was right!

I’d also say life isn’t a race – don’t compare yourselves to others in terms of what they have and you don’t have or vice versa. Just live the best you can, if it goes wrong pick yourself up and go again another day.

Who or what has been the greatest influence on your life?

My late Dad, he always had the radio on, so I know that’s where my love comes from, he also loved his sport. Before he died we ticked the big sports events off we wanted to go to together, we saw England win the Ashes, Europe win the Ryder Cup, special moments I’ll always cherish.

What keeps you awake at night?

I have a close family member who is ill, I ask myself am I doing enough, should I be doing more, what would Dad think.

What has been your proudest moment/greatest achievement so far?

In 2009 I visited all 92 football league grounds in one season to watch a match, over 30,000 miles in eight months, at the time I was only one of a few people ever to do it. I did the first BBC Interview with Nigel Farage when he launched his Brexit Party, and got to put some tough questions to him. Matt Hancock the Health Secretary is everywhere at the moment in these strange times, I remember grilling him when he was Minister of State for Digital years ago. But as a reporter I meet some incredible people, there was a family where the little boy had a terminal illness, we organised for him to meet Santa, those things put your life in perspective.

I brought a telescope recently, Rock and Roll! Binge watching Alan Partridge with a tin of Directors, it really is first class ;).

If you had to have one last meal, what would it be?

A BBQ for sure, nothing better in the summer, Surf and Turf on a barbie is the best!

If you could be anywhere right now, where would it be and who would be with you?

It would be on the 18th Green at St Andrews with my Dad watching the pairings come up the final hole, with a picnic and some beers. There isn’t a day go by I don’t think about him and miss him dearly.

Inter House football, running, always very competitive. I was in Austin.. “Come on the Greens..”

Are you in touch with any other Old Princethorpians, if so whom?

Yes Steve Dade (Dadey) we have remained close mates since we left school, I could ring him now for a beer, actually I might! I also got back in contact with Steve Ross ( Rossi ) a few years back, that was fun to catch up and relive old times.

Is there anyone you would like to track down?

Anyone in my year really, I left as a fifth year in 1990 – You will find me on Twitter @RichWilliamsBBC 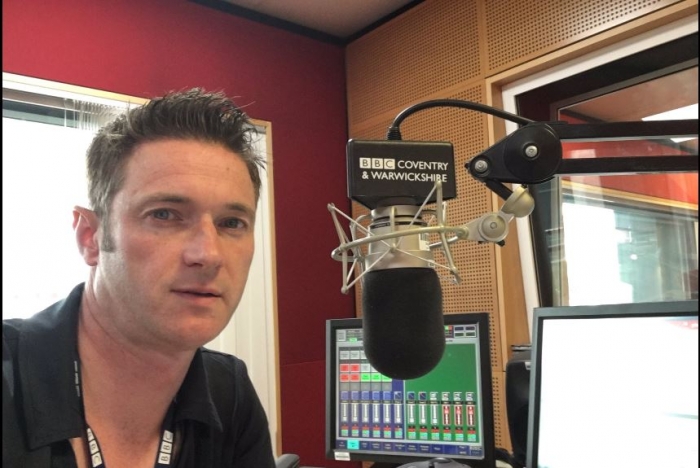