Update From The Archives

I hope that everyone is keeping well in these uncertain times. I usually start this term’s edition of the OP newsletter by telling everyone how busy I have been and this year is no exception. Returning to work at the end of August has meant that I have been busy trying to catch up with the work that built up whilst I was away, as well as looking for different and dynamic ways for events to go ahead now that they have become ‘virtual’. I think the one thing that has really hit home to me since I returned to work is that there are undoubtedly some benefits to this new way of working as it allows for a wider audience to participate.

The first event of the year to move online was the ‘Very Special Old Princethorpians’ Reunion that took place on Saturday 12 September. During the 2-hour Zoom session, it was a pleasure to be able to share information about some of the donations we have recently received (more on that later) and also to search through the Peeps to look at memories that past pupils had of their time at Princethorpe. It was also a great opportunity for the VSOPs to share some of their memories which is always a delight to listen to. The huge bonus of it being a virtual event is that some past pupils who would not normally be able to attend in person due to the distance they would have to travel were able to take part and reconnect with old friends

I have shared a poem written by Mary Margaret O’Connor from 1949 that strikes me as just as relevant today. It might spark your own memories of climbing to the top of the Tower (or even abseiling back down again). Please do email me at janetteratcliffe@princethorpe.co.uk or send me a tweet at @PFdn_Archives on Twitter if you would like to share, I’d love to hear them.

Our annual Heritage Open Day tour also moved online for the first time. Designed using Google Virtual Tour Creator, it is a self-guided tour around the college with key points of interest in each scene accompanied by a mixture of text, photographs or audio. Because we were not limited on time, Alex Darkes and I were able to include locations that would not normally be part of the tour including Switzerland, the Girls’ School (now G4) and the remains of the Gas Works for the Priory. At the point of writing this, we have had over 600 views which is very gratifying and the feedback we have had has been very positive. Plus, unlike our in-person events that are limited to a 2-hour slot on a Sunday, the tour is still available to view from the comfort of your own sofa just visit https://poly.google.com/u/0/view/a9JBrmdamFP

When most people think of archives, they tend to think of paper records but, as I have mentioned before, one of the great things about being a school archivist is that we get a very diverse range of items donated.

The first item I wanted to tell you about came from Mary Wheildon during the Trinity Term. I returned to work after the summer to discover a brandy bottle in my office – it was empty I hasten to add! The bottle of Cormandon brandy from the Jarnac region was presented to the Wheildon family to thank them for hosting Beatrice Delachanel during the Christmas holidays in 1957. The bottle remained unopened for 45 years until circa. 2002 when two important events coincided. The Delachanel family returned on a visit on the occasion of Arthur Wheildon’s 90th Birthday. Not only did the name V.S.O.P (Very Special Old Princethorpians) take its inspiration in part from the label of that bottle but it was wonderful that Beatrice Delachanel was able to take part in the VSOP re-union in September from her home in Brussels.

Another significant donation came from Sister Mary Lawrence and Sister Mary Placid OSB. It was a delight to receive and the items help to give a real insight into religious life at Princethorpe. Alongside the varied books and leaflets, there were also embroidered holders for the Daily Office, certificates (including Sister Mary Lawrence’s teaching qualification from 1948), and a beautiful Postulator Cross in its original case which contains relics from Pope Pius X. The items have been catalogued at SMP.34.29 and I have already been able to share the beautiful hand-drawn illuminated manuscript (SMP.34.29.12) which details the different ceremonies an individual took part in on their path to being professed with Year 7 classes as part of their R.S. lessons. Poignantly, there was a handwritten label on the outside of the carrier bag written by Sister Mary Placid before her death in 2016 that read "Please offer these items to Princethorpe Priory. It all began there".

I hope that this update has given a reminder of just how special our Archive is here at the Princethorpe Foundation and for it to continue to grow, we are reliant upon donations. If you would like to donate anything to the Archive, please get in touch. We are very happy to receive scans of items if you do not want to part with the originals. We are looking for your memories too and would welcome old stories! To get in touch, please email me at janetteratcliffe@princethorpe.co.uk or phone me on 01926 634200 extension 334.

It was very gratifying to return to work to an inbox full of enquiries, a number of which had been sent by past pupils and members of staff. Because of the number of other tasks that had also built up, I am still working my way through them so I apologise if you have not received a response yet. I aim to get back to you as soon as I can. 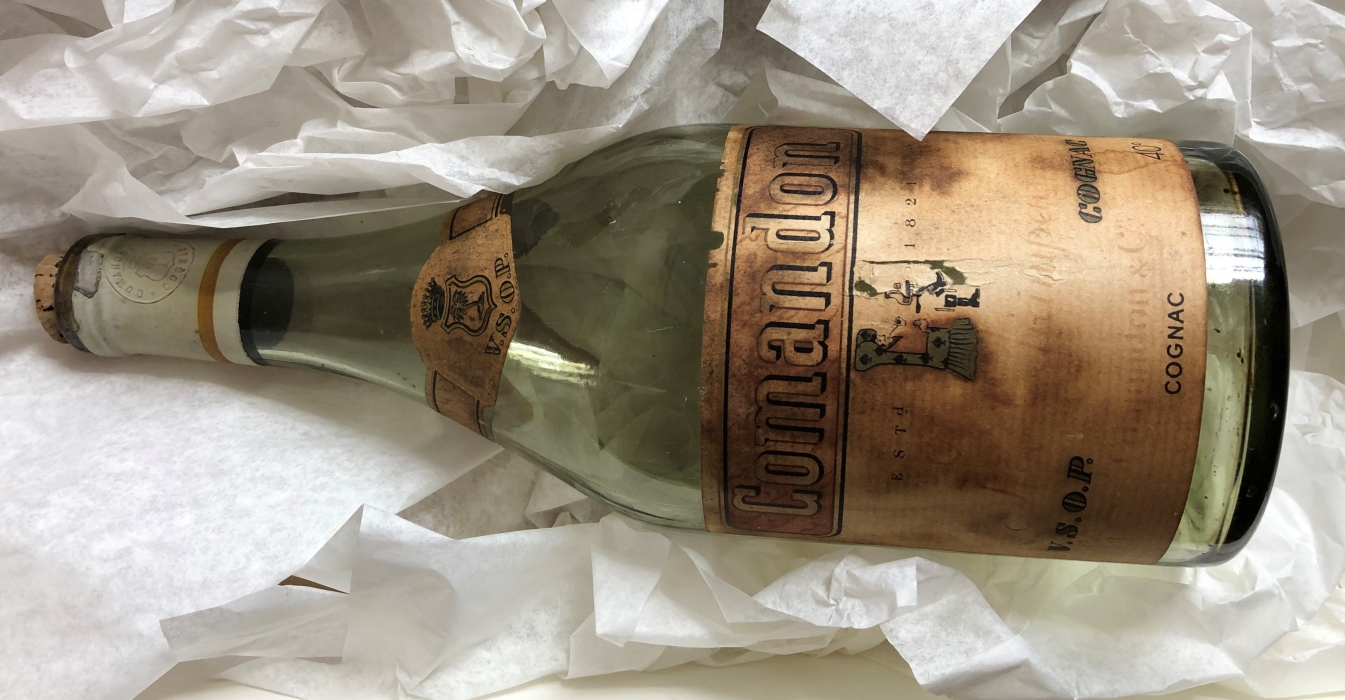 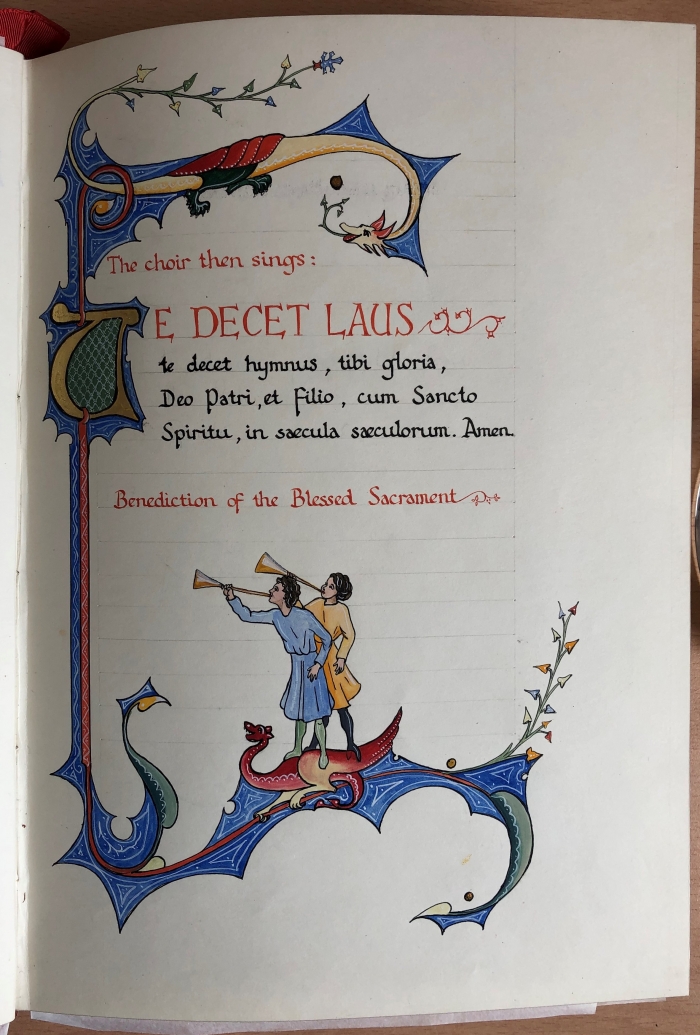 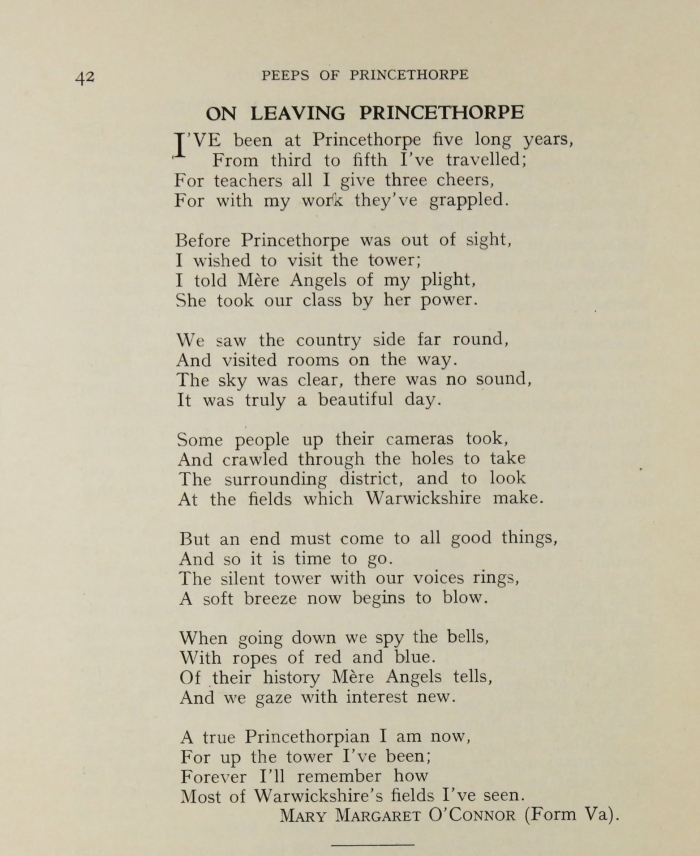 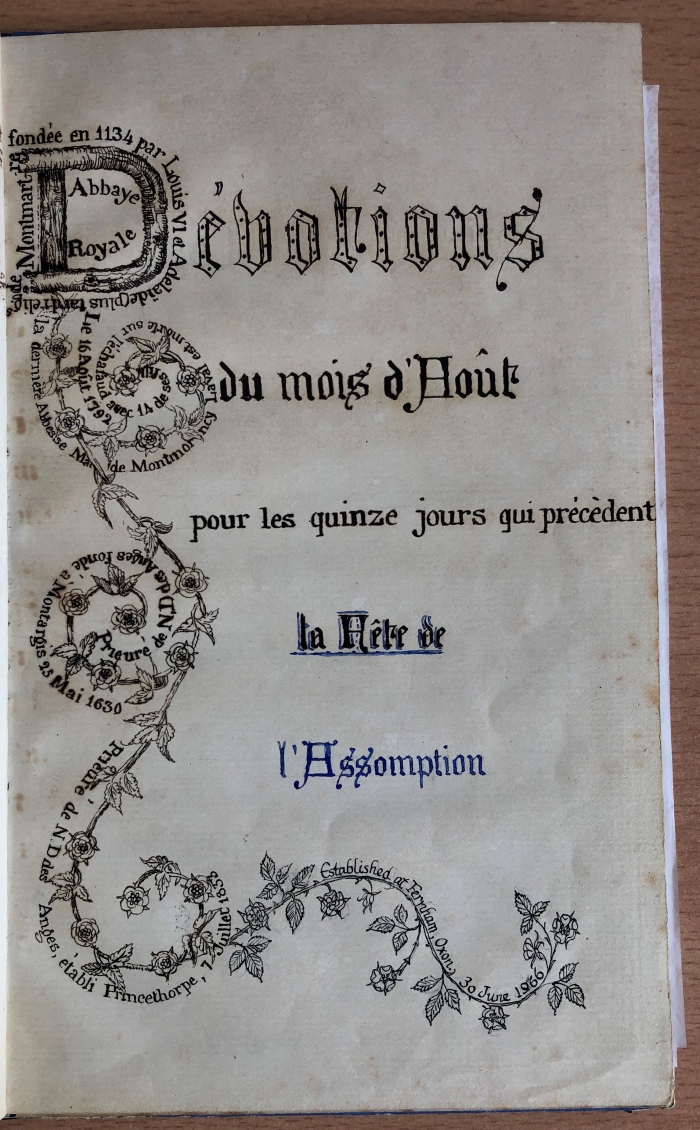 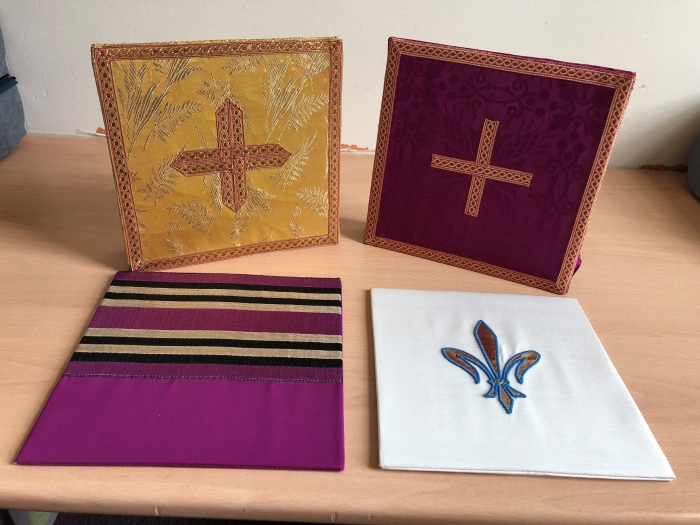 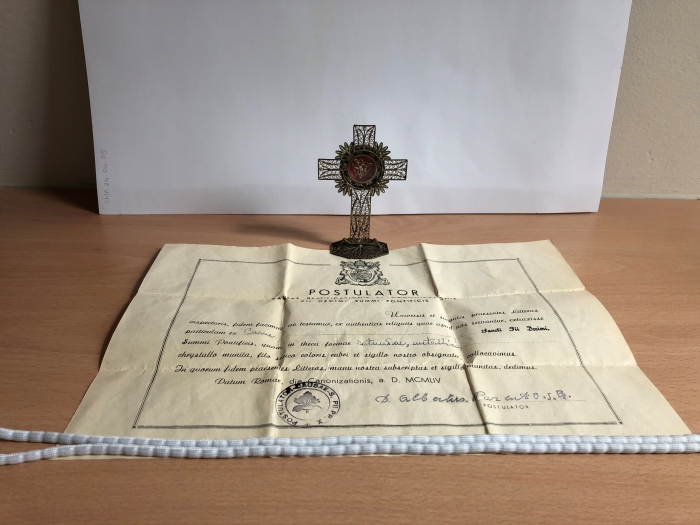 Before 1940, the girls of St Mary's Priory School, Princethorpe, would have known this as their school hymn, after that date it was changed to Except the Lord Build the House.

The song was written by two of the nuns who lived at the Priory, with music by M.M. Mechtilde, O.S.B. and words by M. M. Paul, O.S.B. Unheard for almost 80 years, the song has been brought back to life. Having recently unearthed the sheet music and lyrics from the school archive, the hymn has been newly recorded by Gil Cowlishaw, Princethorpe College's Director of Music.

The song tells the story of the nuns' journey from Montargis, France in 1792 to eventually settle in Princethorpe.

Accompanied by photos from the archives you can listen to St Mary's Priory original school hymn here: https://vimeo.com/457741565 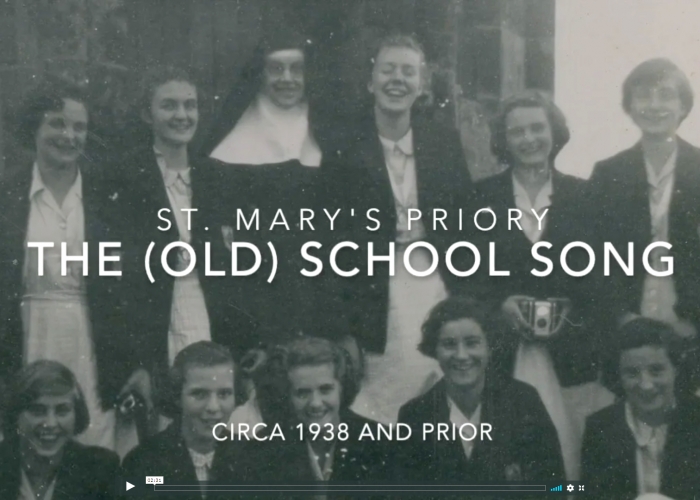 Princethorpe Motoring Festival 'On The Road Again' In 2021

This year should have seen the 25th Motoring Festival at Princethorpe, but we couldn't be there in person, so we attended in spirit with a whistle-stop tour of Motoring Festivals from the past.

The first mention of the Motoring Festival, at the time referred to as the Princethorpe Motor Show, was in an article written by Alex Darkes for the Tribune Magazine of 1995. In it, he mentioned some preliminary ideas for the event and put a call out for interested exhibitors and parents to get in touch to help organise it for the 30th June 1996. It must have garnered enough interest as the very first Motoring Festival did indeed go ahead on that date.

It was a success from the start with nearly 60 cars taking part in the first festival and the Rover P5 Owners’ Club holding their West Midlands regional rally at the event. While John Boyes won first place for Best Car for his 1931 Lagonda Tower and Steve Allan won first place for his Morgan 3-wheeler, it was the winner of second place in both categories that caught my eye whilst looking at the magazines. Mr and Mrs D.H. Saunders exhibited a ‘Docker’ Daimler Continental which had been shown at Motor Shows as a prototype but never made it to production. This particular car was used by Lady Docker herself.

Some of you might not know but there is a link between the Docker Family, Daimler, and the Foundation School, Crackley Hall. After the Sisters of Mercy purchased Crackley Hall in 1944 from John Siddeley, 1st Baron Kenilworth (another family with a strong motoring heritage), they realised that they needed more space for the school itself. The Sisters purchased the Gables in 1946 and it then formed the main school building for generations of the school’s pupils. The Gables was purchased in 1902 by Frank ‘Dudley’ Docker and the family lived there until he moved to Amersham in 1934. Dudley Docker also arranged the purchase of Daimler Motors in 1910 and his son, Bernard, who would have grown up in the Gables, was also chairman of the Daimler Company. After the Docker family sold it in 1934, The Gables was then known as the Armstrong-Siddeley Hostel presumably because it was used to house members of staff there.

The weather in 1997 was not very helpful with torrential rain making the Orchard waterlogged so that the festival had to be moved to the hardstanding on the playground. This didn’t stop the dedicated motorists though with more than 35 exhibitors taking part. Alongside the scoop of the new Skoda Octavia which wasn’t being released in the UK for another year and Coventry University displaying a range of ¼ scale styling models, Les Maybury won the prize for Best Condition Award for his Jaguar XK120 which was on the road again for the first time in 15 years after extensive restoration.

Never one to stand still, Alex Darkes and his team looked for ways to innovate and diversify the Motoring Festival. In 2002, the first Road Run was held in which cars completed a route of about 30 miles around local countryside. This has been a core component of the festival ever since. From 2007, a check point was added to the route where participants received a stamp part way through the route on their stamp card, along with the coveted commemorative plaque for taking part of course. A tradition that continues today.

After commercial vehicles joined the range of vehicles on display from 2005, the Motoring Festival finally broke the barrier of having 100 exhibitors at the event in 2006. It had come extremely close for the previous couple of years. A record 130 vehicles of all shapes and sizes were exhibited with over 60 taking part in the morning’s road run. It seems to be particularly fitting that this happened on what was the festival’s 10th anniversary.

Over the years since the Motoring Festival was founded, Princethorpe College has been proud to welcome all manner of people and vehicles to the grounds including cars, motorbikes, commercial vehicles (including a gyrocopter in 2012), dedicated enthusiasts from DAF, MG and Triumph Stag owners’ clubs, and members from the Old Lawnmower Club. None of this would be possible without the hard work and dedication from Alex Darkes and his team to whom we owe a massive thank you and we look forward to welcoming you back in 2021! 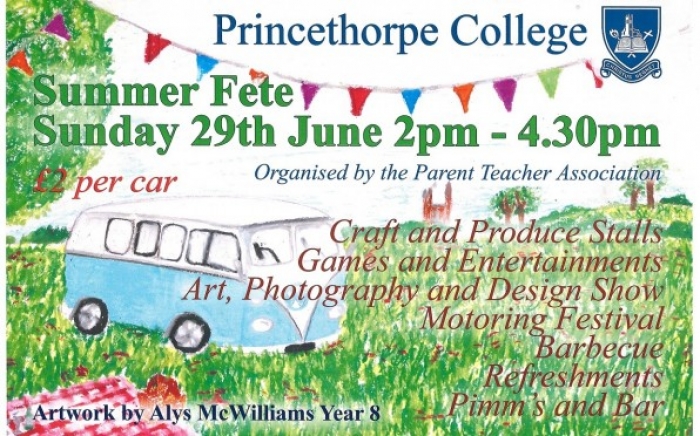 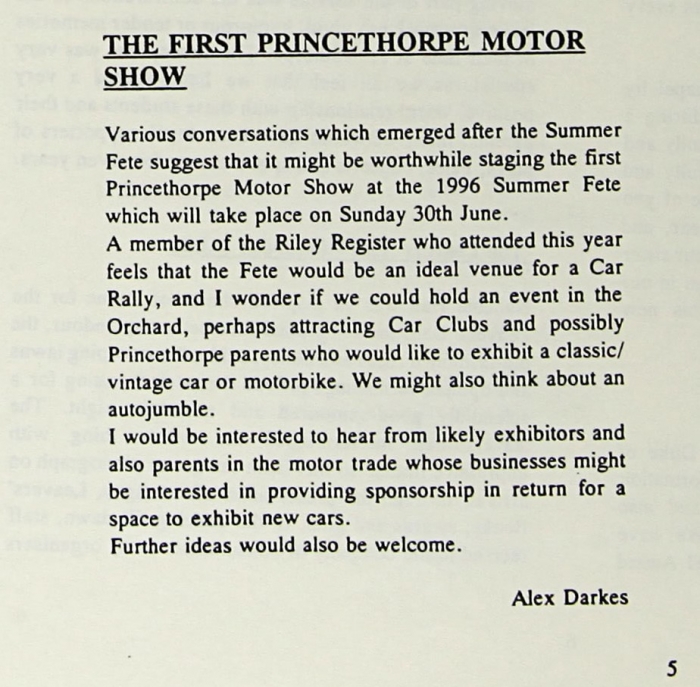 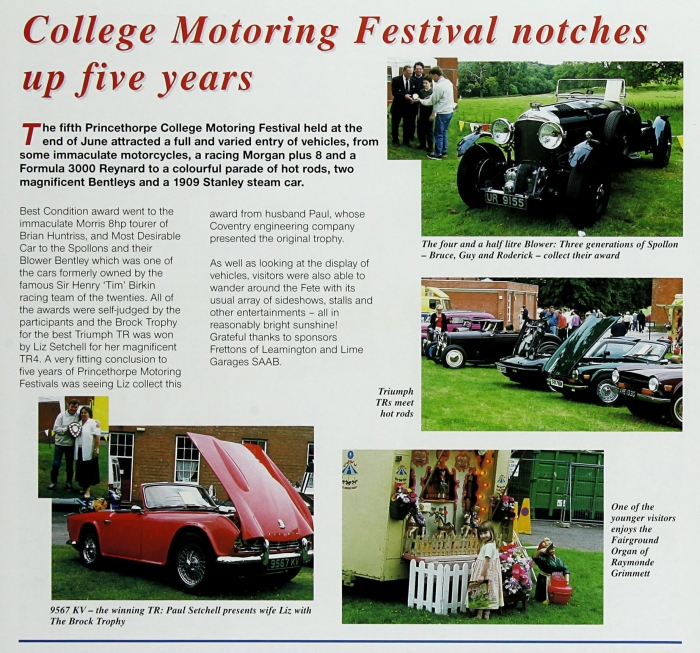