The College clock tower has been shrouded in scaffolding for over a year now undergoing some much-needed renovation. The clock tower is a landmark at Princethorpe and has played an important role in the daily lives of all who have lived and worked here. The current clock was purchased in 1861 and was last renovated in 1959 for the then Reverend Mother, Mary Augustine’s Golden Jubilee.

The stonework of the tower was badly in need of restoration, when the structure had originally been built the builders had used metal tie bars to hold the stonework together. Over the years water had rusted the metal and the rust had eventually blown the stone. Stonemasons, Midland Conservation, have replaced every defective piece of stone.

The clock is a cast iron chair frame design movement with hour strike and ting tang quarter chimes, it drove two external dials with an anchor escapement with pendulum action. The weight driving pulley system was badly in need of restoration, particularly the top pulleys and timber support above the weights, the pulleys needed to be removed for overhaul and the top fixing timber replaced, so it was decided that converting the movement to automatic winding was the best way forward.

Cumbria Clocks, church and public clock specialists, took on the work and were amazed by the ingenuity of staff, including former Head of Chemistry, John Miller and Estatesman, Gerry Lovely, had shown in keeping the old clock going

It has all now been carefully restored, with a new auto winding mechanism fitted, the clock movement dismantled and cleaned and the clock faces returned to their original size and given a fresh coat of blue paint. The dials and numbers are all now a beautiful bright shining gold.

The weather vane had also rusted and no longer moved. Its condition was so poor that we considered replacing it. However, the stonemasons were able to rebuild it and finish it with a new paint.

It has been wonderful to see the clock and weathervane atop the tower in the lovely autumn sunshine and to hear the distinctive chimes sounding. It can now once again be a focal point for the whole community to enjoy. 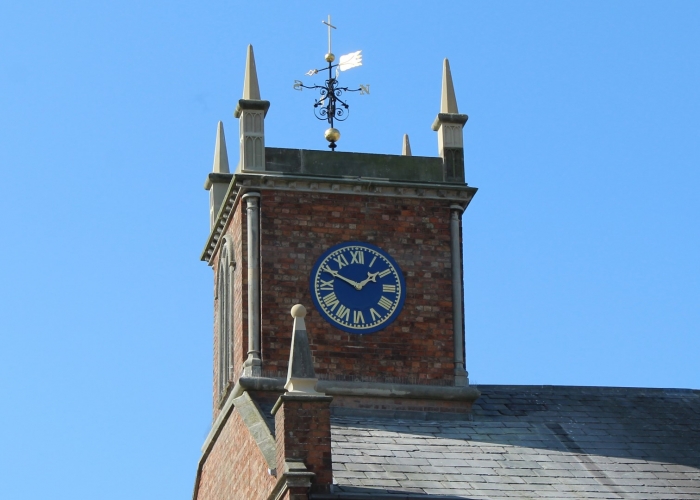 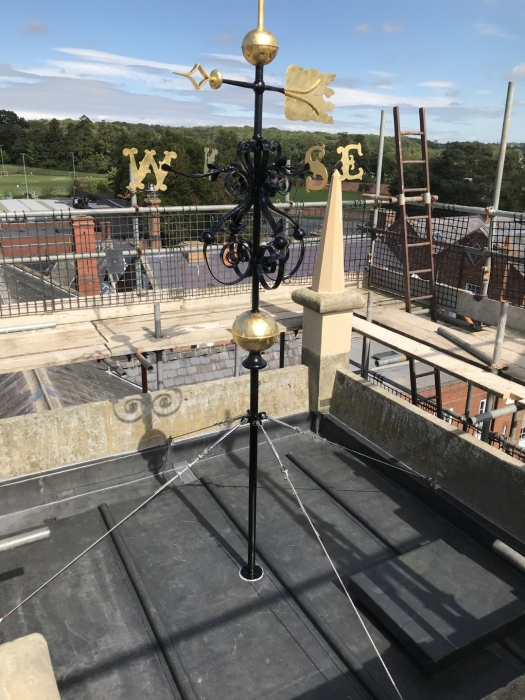 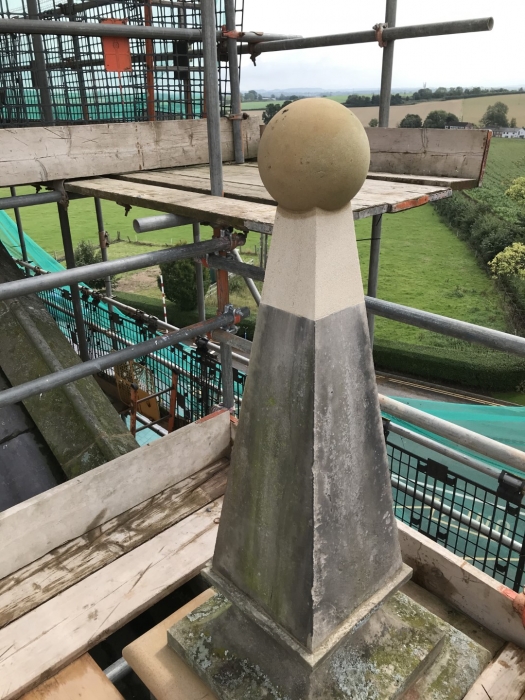 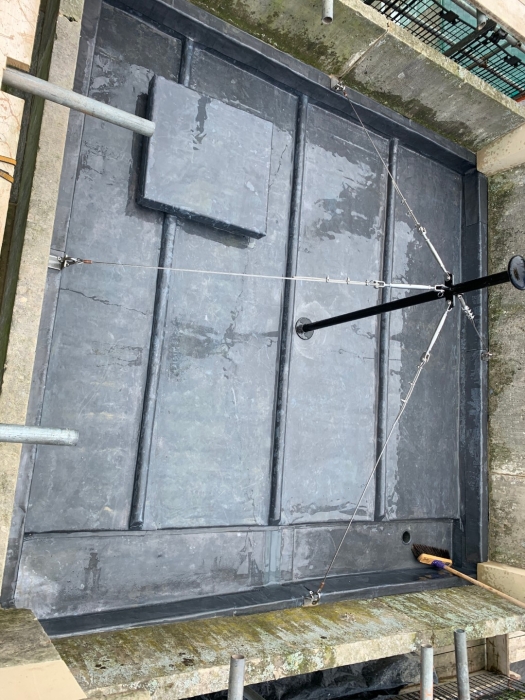 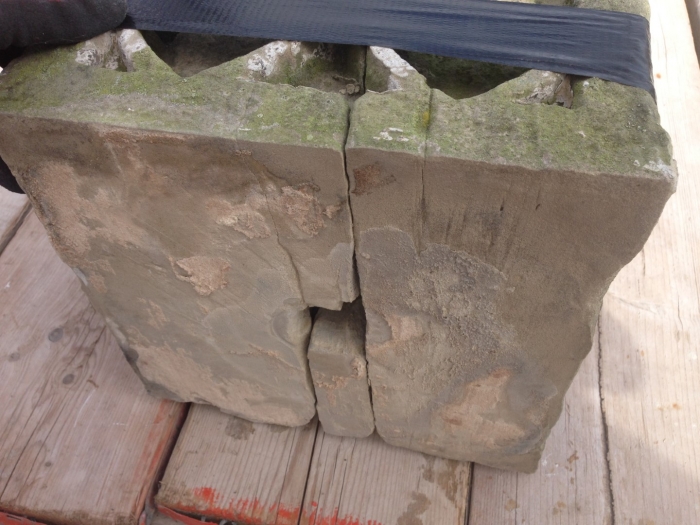 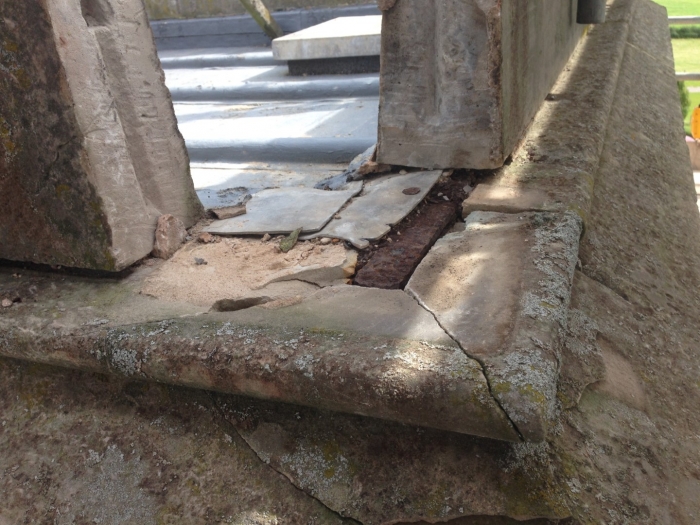 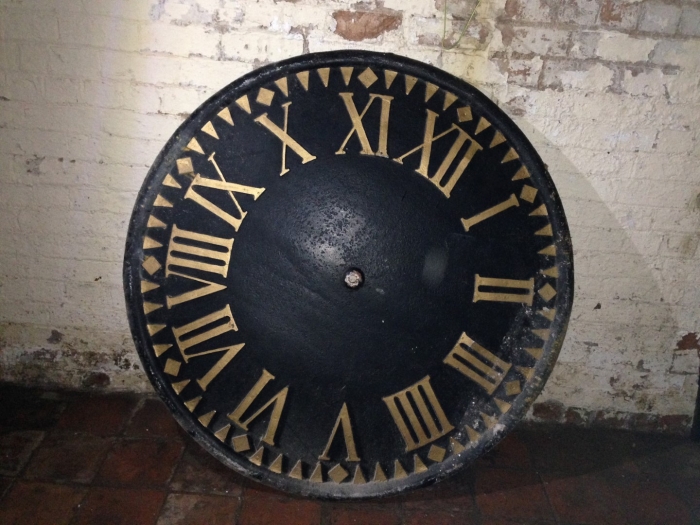 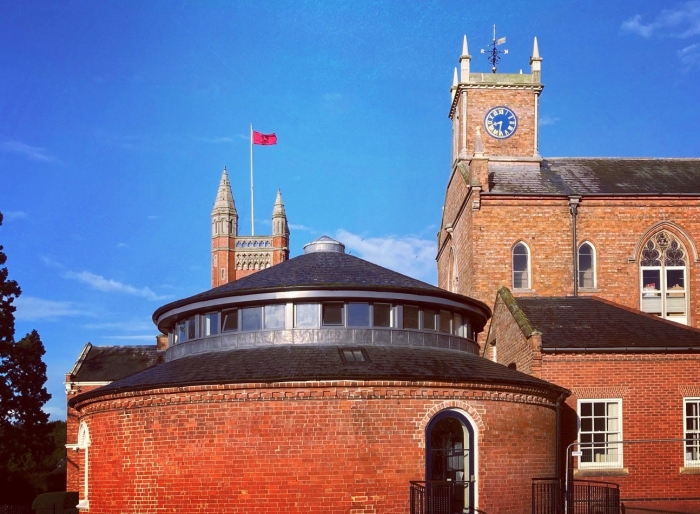 Princethorpe College is celebrating another year of excellent exam results.

This summer 47% of all A-level grades were A* or A and over 90% of grades were C or better; at GCSE pupils celebrated excellent GCSE results with 60% of all entries graded 9, 8 or 7 and 50 pupils achieving nine or more 9, 8 and 7 grades.

Ed Hester, Headmaster, said, "Our students have worked so hard and we are incredibly proud of their achievements."

Ed Hester continued, "This year’s A-level results have been arrived at in a very different way to normal. Overall, we are pleased and feel that the results are generally fair and reflect the hard work and achievements of our Upper Sixth. Special mention must go to Hannah Porter who was awarded 5A*s."

At GCSE Princethorpe pupils performed well and there were many exceptional personal achievements.

Congratulations go to Caitlin Mason, Ciaran Smith, Ben Shipton and Ben Scares who were awarded an outstanding eleven or more grade 9s each.

Headmaster, Ed Hester, continued, “All credit goes to our pupils and staff for their commitment and hard work.  Our 2020 A-level and GCSE results are very strong indicators that the school’s academic achievements across the ability range continue to go from strength to strength." 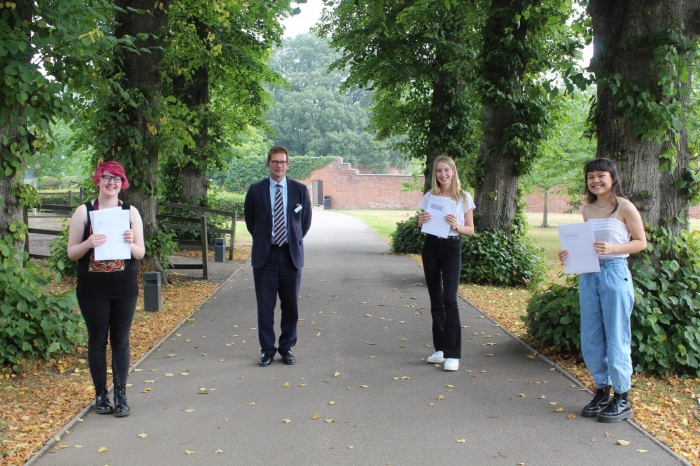 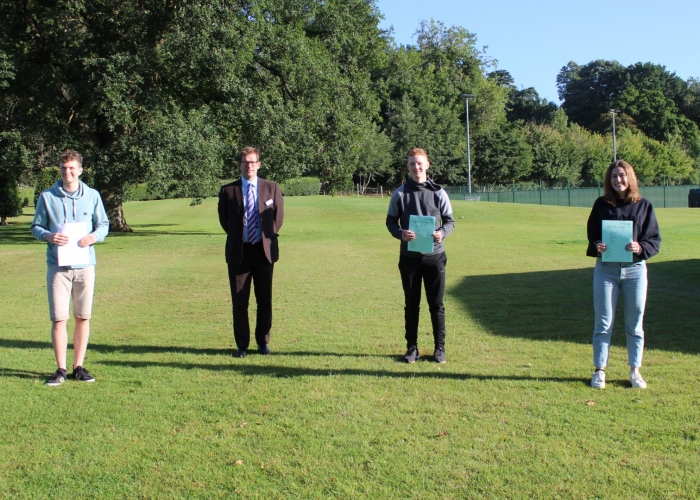 This year, alongside many other events, the College's Summer Art, Photography And Design Show moved online and took place virtually.

Featuring work from A-level Fine Art, Photography, Product Design and Textiles students alongside GCSE Fine Art, Resistant Materials, Electronics and Textiles pupils, and work from the College's Art Club the show was a wonderful opportunity to celebrate of our pupils’ wide-ranging creative talents.

Those who know the College will be familiar with its formidable reputation for quality Art and Design. The walls of the College are adorned with exceptional examples and the work included in this year’s virtual show was no exception, including striking portraiture and photography alongside talented and technically complex product design.

The show was put together as a short video featuring images of all this year’s examination work and included introductions from the creative teaching staff including Head of Art and Photography, Paul Hubball, Head of Design and Technology, Paul Scopes, Art Teacher, Sue Harris and Textiles Teacher, Miranda Porter.

Our thanks go to the Art Department and to the Design and Technology Department for all their support and inspiration to pupils this and every year and for their help in putting together such an outstanding show.

You can still view the 2020 Summer Art, Photography And Design Show, just follow the link here. We hope you enjoy it! 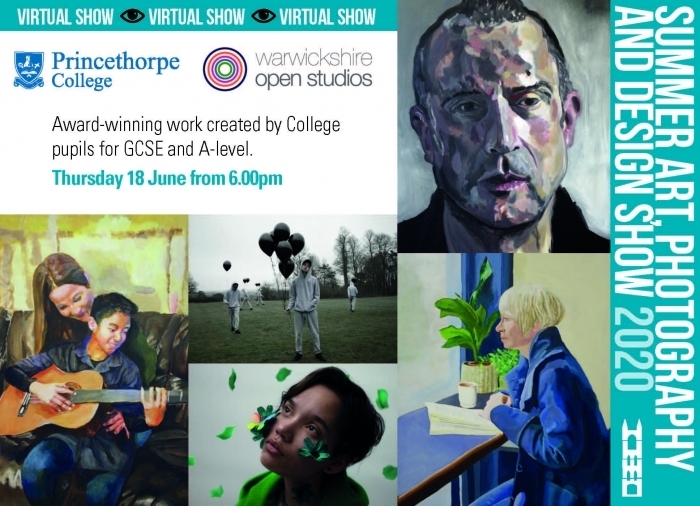 The Countdown To Entrance Exams For 2021 Entry Has Begun

Our friendly Admissions Team has been busy with enquiries and registrations from prospective parents. The final deadline for registrations is now Friday 4 December, to allow the College time to seek references from junior schools.

Due to the current COVID-19 restrictions there are only a few opportunities for prospective pupils and their parents to visit the College before the Entrance Exam session. The school is running Taster Experiences for Year 6 pupils in early November, and is hoping to run a by appointment only Open Monring on Thursday 26 November.

The Admissions Team is also planning to host a Virtual Year 6 Parents' Q & A session on Monday 16 November from 6.30pm to 7.30pm to answer any admissions and entrance examinations related questions in an informal forum.

Comments, Ed Hester, Headmaster, “We know the decision to push back the date for Entrance Exams has been welcomed by prospective parents and pupils. We are aware that many parents will be concerned about their child’s preparedness for the exams after this long period away from normal school life. By January we hope that families will have had the chance to visit the College in person and that candidates will have settled back into school life and be in a much better position to take the exams.”

More information on admissions is available from the College website here.

If you have any queries relating to admissions please feel free to email the Registrars at admissions@princethorpe.co.uk or call them on 01926 634201/262. 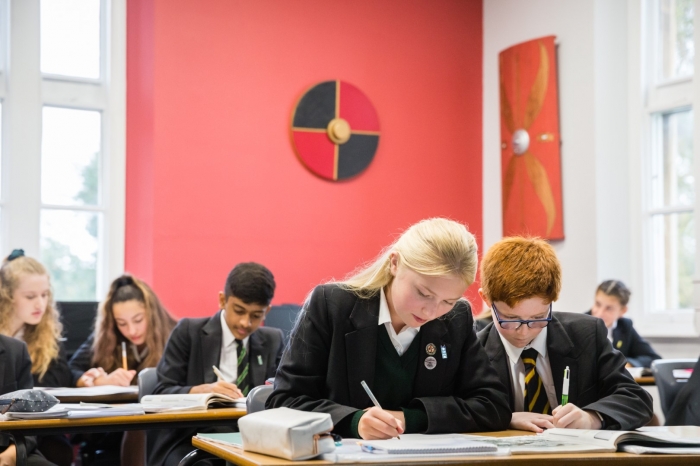 Are you missing out on Princethorpe? The serenity of the Chapel, the iconic Tower and Quad, the vaulted ceilings and stained glass windows, the echoing tiled corridors, the peace of the Library, the bustle of the Refectory, the hubbub in the Sixth Form Centre, the light airy spaces of the Limes, the acres of sports pitches, the rolling green campus and even those always industrious classrooms?

If so, you might just enjoy our new Virtual Tour. Put together for this College's very first online Open Evening, it takes you on a trip around the College.

Get a bit of Princethorpe back in your life - we hope to see you back there before long! 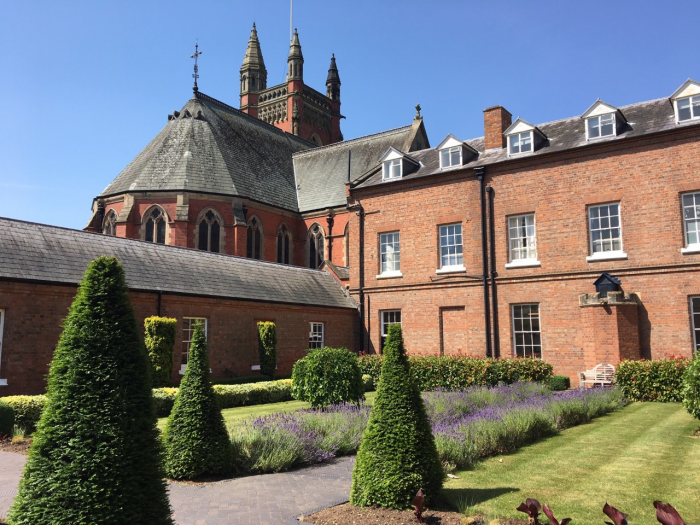 The latest edition of the College's Admissions Update e-newsletter has just be published and can be found here.

This edition is for those looking at entry to the school specifically in September 2021 for Years 7 to 10 and Sixth Form. Full of information and news, it gives a feel for College life, tells you about forthcoming events which are open to prospective pupils and their parents and has plenty of helpful advice about the admissions process.

This term we will be conducting our events for prospective families differently, they will be available on an appointment only basis and in a socially distanced way, to enable us to manage numbers and adhere to government guidelines.

Don't forget the deadline for registration for the 2021 Entrance Examinations is now Friday 4 December 2020, with the examinations taking place on Saturday 23 January 2021. Please register as soon as possible.

If you are looking at entry to the College post September 2021 then do put Wednesday 9 June 2021 in your diary as we will be holding our Summer Open Evening on that day. The College also hopes to run Taster Days for current Year 5 children next May and June. Do email the admissions team if you would be interested in registering for these events.

The Admissions Update newsletter is issued twice a year to coincide with key admissions periods, the next edition will be published in Spring 2021.

If you have any queries relating to admissions please feel free to contact the admissions team at admissions@princethorpe.co.uk or call 01926 634201. 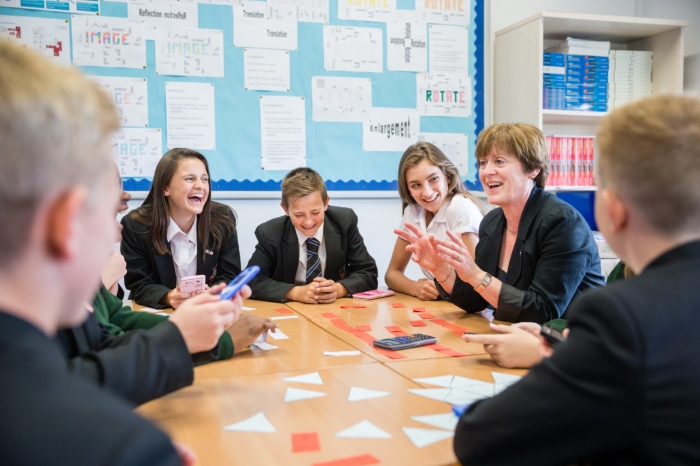 The latest editions of the Pinnacle and Minnacle were published in June. Showcasing exceptional work by pupils from across the Foundation they are an inspiring read.

They celebrated the extraordinary 'home learning' that took place during the coronavirus lockdown and are a testament to the dedication of pupils and staff to continue with their studies in the face of the pandemic restrictions.

From the Spring Social Distance-Sing Concert and the Princethorpe At Home Recital to superb Art and DT, English competition winners, History projects, Bridging courses, EPQ and even an Online Bake Off, they showcased flair and ingenuity across a wide range of subjects and year groups.

The Minnacle included equally impressive work by the Foundation junior schools, Crackley Hall and Crescent School. It was wonderful to showcase their pupils' talents too!! 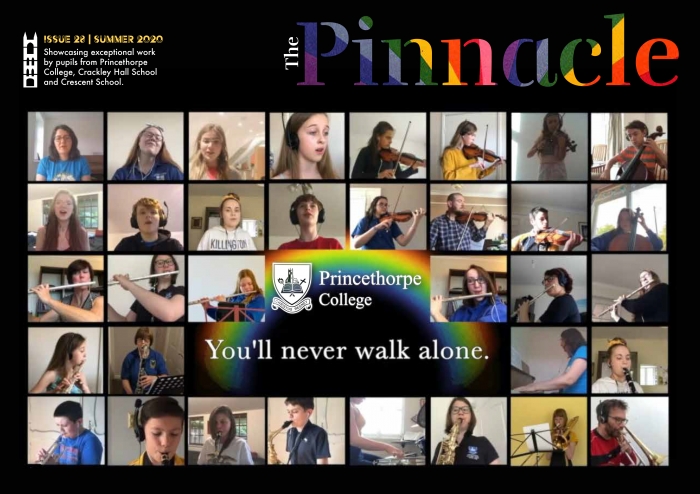