Update from the Archives and 1940s Crescent School Photograph – Lent 2022

I am sorry to say that this will be my final contribution to the Old Princethorpians Newsletter as I move on to a new role elsewhere at the start of February. An extract from an article written by Jonet Slater for the Peeps magazine of 1964 (reference SMP. 27.3.70) summed up what my time at Princethorpe has meant to me:

Princethorpe must mean all things to all people who have ever been near it, let alone those lucky creatures who actually lived there and learned there (or tried to!), for me it seems to be an amalgam of little things.

The first time I drove up to Princethorpe College, I found myself a bit awestruck by the beauty and magnificence of the buildings and surrounding grounds. Even now, more than four years later, I am still taken aback at how lucky I am to be part of this setting. Researching and then sharing the history of the campus with staff, pupils and outside visitors has been one of the best parts of my role here.

A place, though, is nothing without the people. On a daily basis, it has been wonderful to work closely with colleagues that acknowledge and cherish the heritage of the Foundation and support the archives in so many ways. There is a very special spirit to Princethorpe that welcomes you in and makes you feel part of a family. This is also shown by the active Old Princethorpian community, your relationship doesn’t end after you leave but is lifelong. I would particularly like to thank every past pupil and staff member that I have had the pleasure of talking to and getting to know over the last four plus years in all the Foundation schools. It was a real privilege to hear your stories and the archive has really benefitted from your generous donations of materials. I am sure that the next archivist will be delighted to find themselves welcomed by such a friendly group.

Before I go though, I thought it would be a good opportunity to share a very exciting item with you and to ask for your help once again.

Thanks to the eagle eyes and expert eBaying skills of Foundation Bursar, OP and OC, Eddie Tolcher, we were able to secure an early photograph of Crescent School shortly before Christmas (see gallery). This was particularly exciting as we have very few records dating from the early days of Crescent School. The seller had listed it as being from 1946 but there was no other information attached. I think that the photograph is a whole school photograph and is likely to date from at least 1947 as the school did not move to Horton Crescent, which can be seen in the background, until then. It is possibly dated even later given the number of children in the photograph.

This is also where we are asking for your help – are you in the photograph and tell us more about it? Do you recognise anyone in the photograph? Can you help us establish a more accurate date? Any help that you can give would be much appreciated, you can email oldprincethorpians@princethorpe.co.uk. 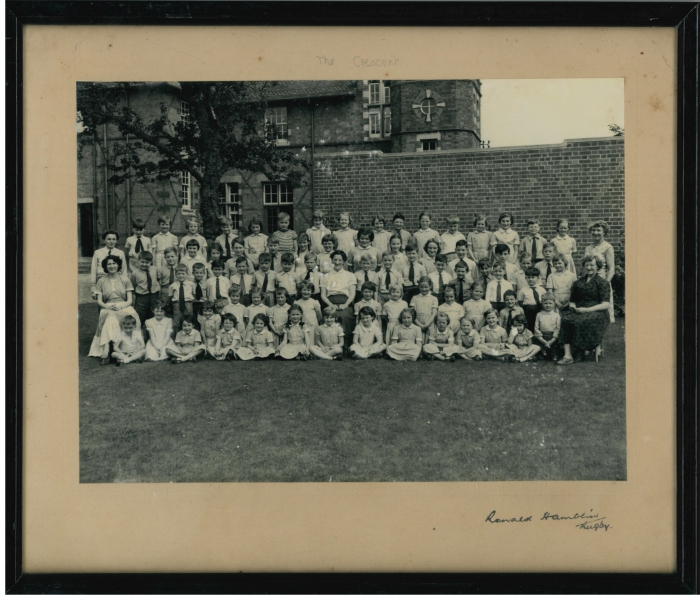 Back in the 1970s there was a thriving and very lively dramatics society here at Princethorpe – oh no there wasn't - oh yes there was! Trawling through some of our wonderful archive material we have found a copy of the cast list for The Red Herrings and Billy Bunter. The programme tell us the stories, Red Herrings – 'The scene takes place on the rocky coast of a British Island under the occupation of the Germans, in the year 1941.' While in Billy Bunter – 'The scene takes place in a typical old classroom at the premises of Bunter’s School at which he boarded.'

There were many starring roles – do you remember taking part? Have you any photographs of the production? As a hint the cast list includes: Anthony Cowland, Alex Darkes (yes, that one), Christopher Marot, Charles Lawton, Melvyn Glynn to name but a few.

If you can answer any of these questions or have any photographs you would be happy to share we would love to hear from you. Just email oldprincethorpians@princethorpe.co.uk.

Don't forget the Archive Collection is available at https://archives.princethorpe.co.uk/ and you can also follow the Foundation's Archive Twitter feed at https://twitter.com/pfdn_archives. 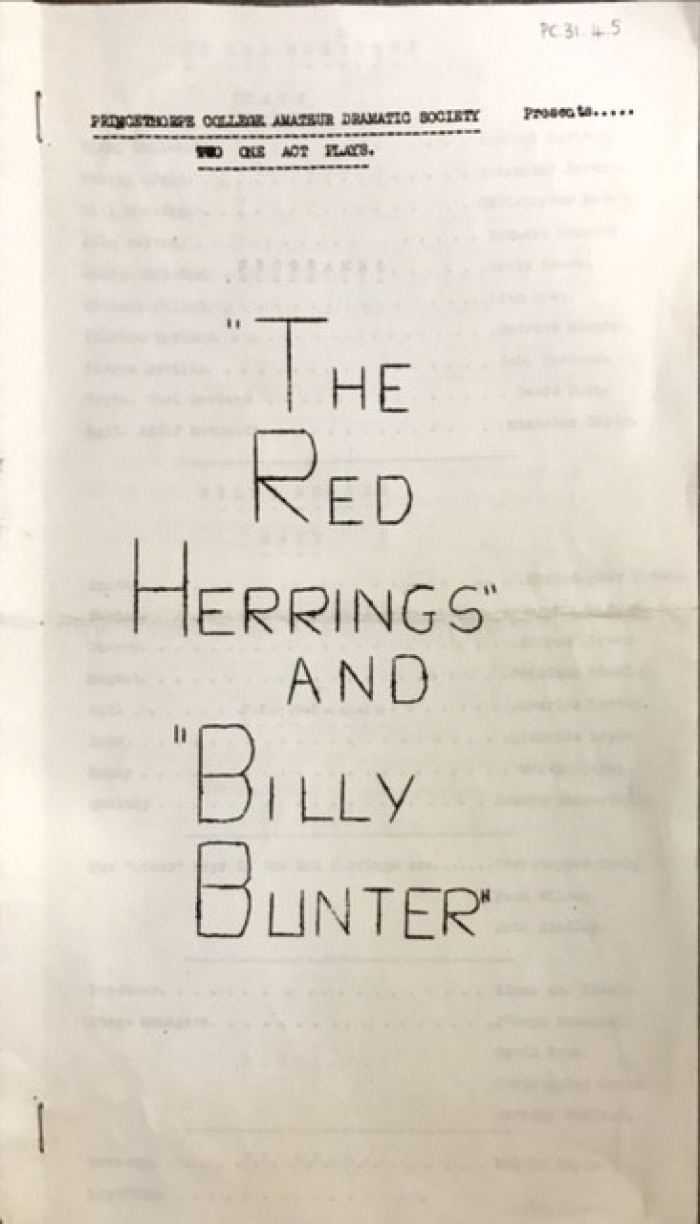 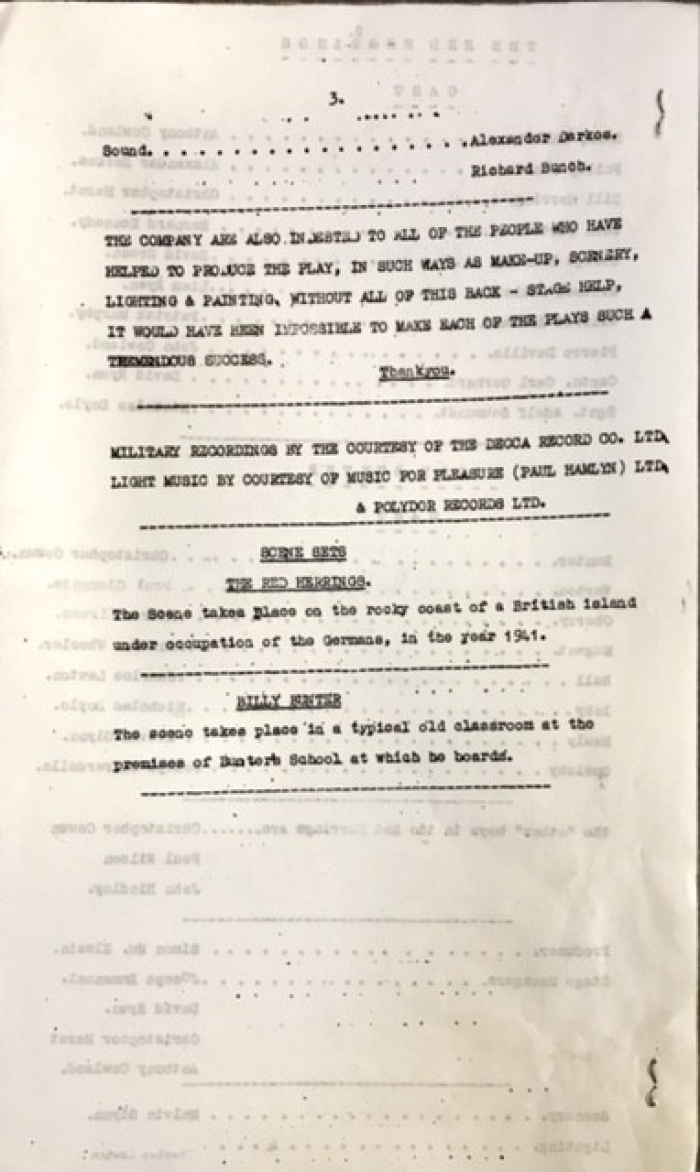 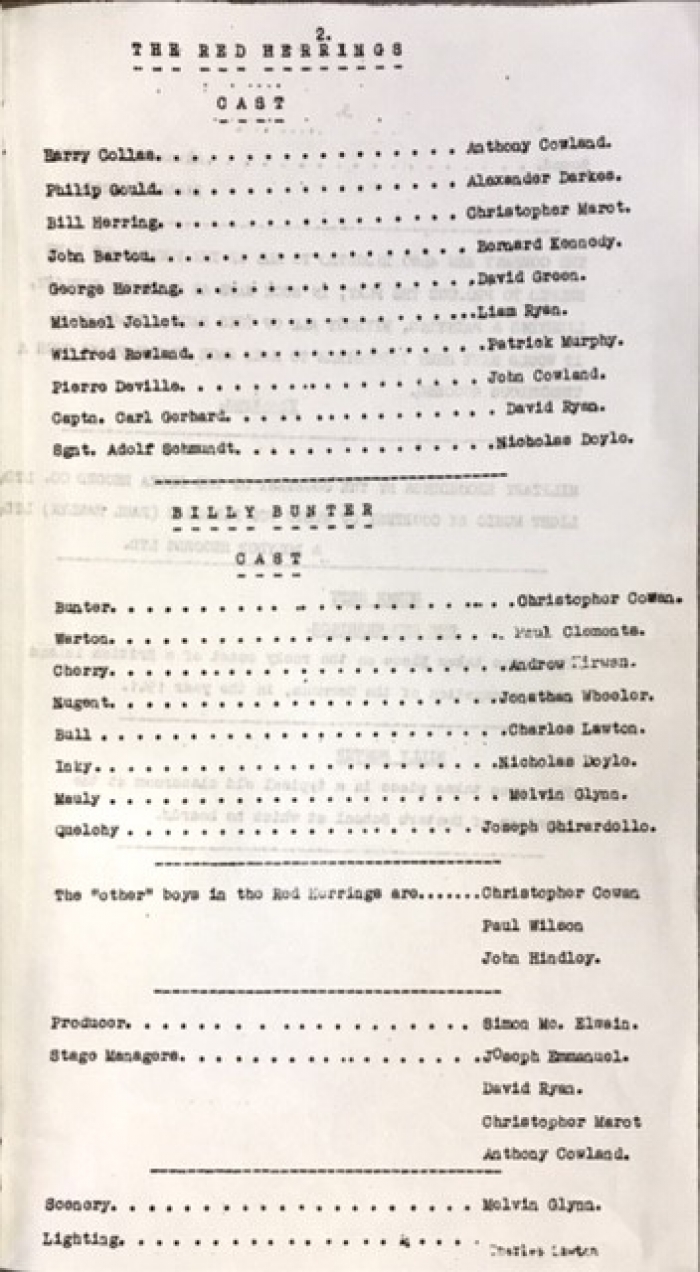 Hanging on the walls of the back stairs are the old Honour Boards for St Jospeh’s Convent School. They record the names of pupils who received awards at the school over the years and date back as far as 1948. They are a bit inaccessible, but following a request from an old pupil, and with the help of a ladder and a very kind caretaker, we managed to take these photos. We hope you enjoy searching for your name! 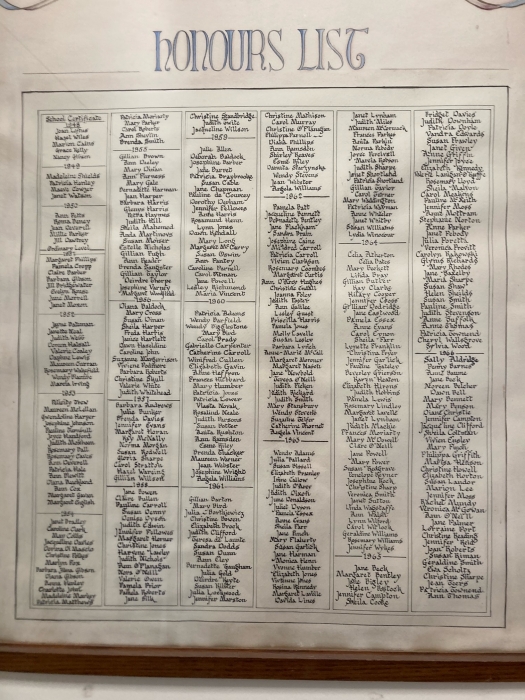 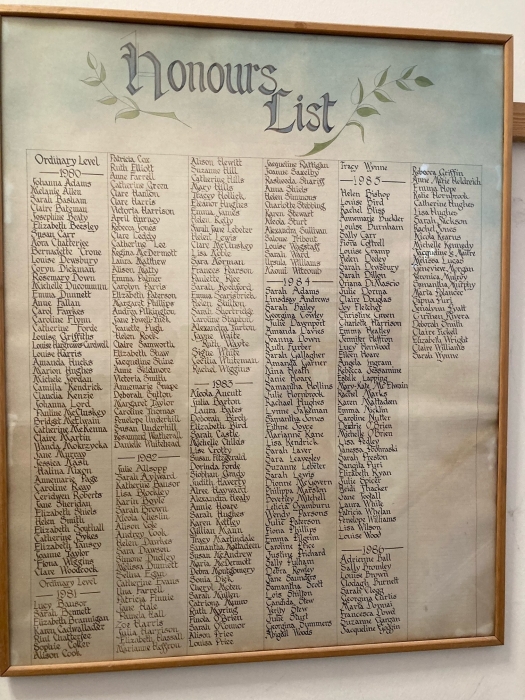 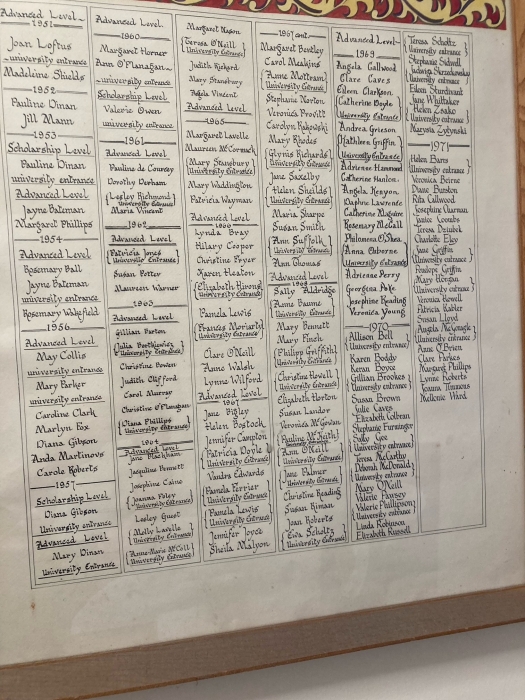 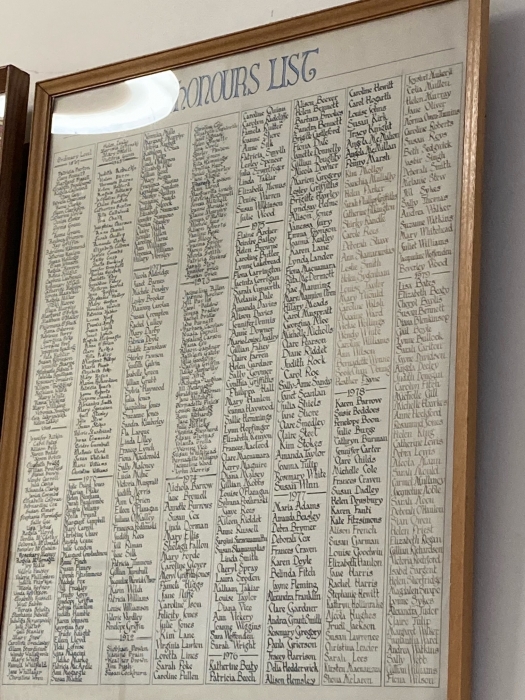 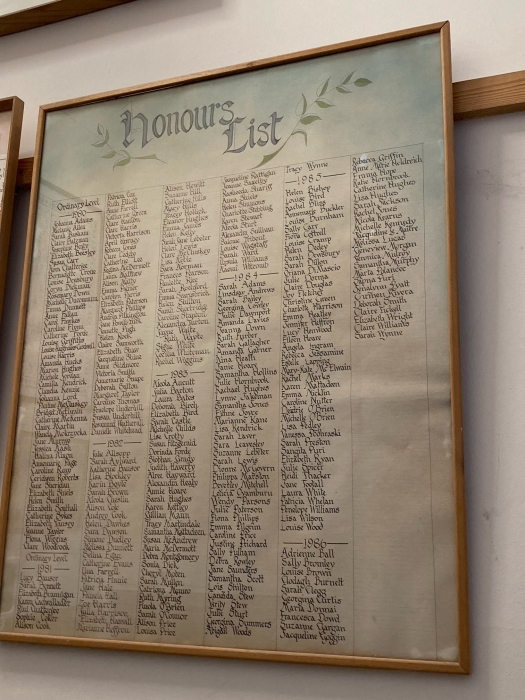 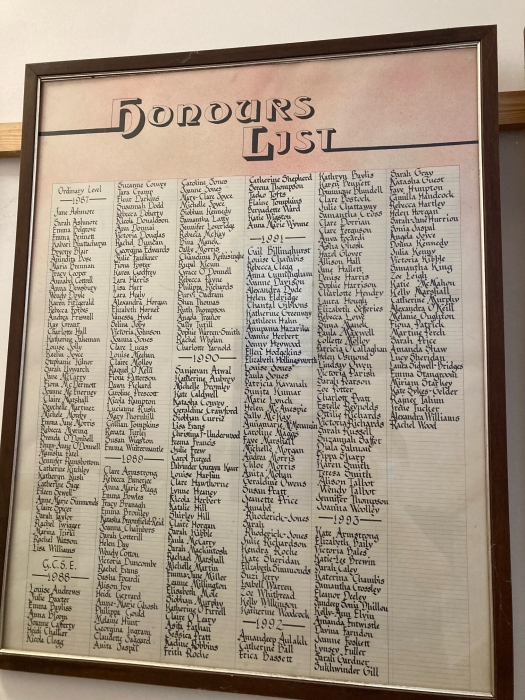 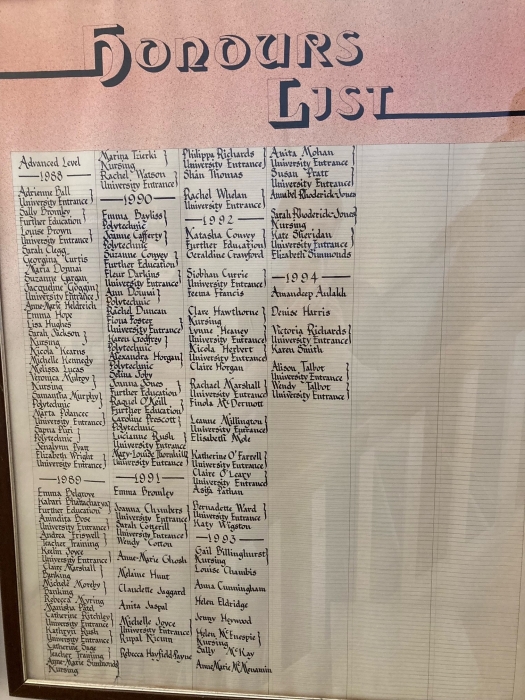 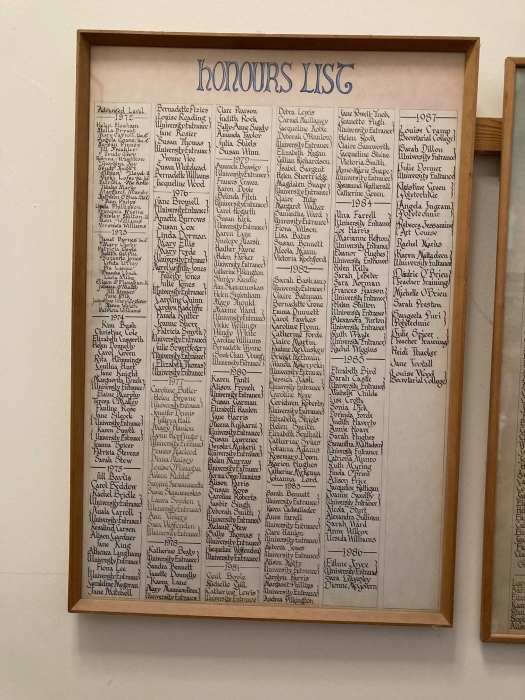 The Arrival Of Electricity At St Mary's

Electricity came rather late to St Mary’s Priory and until the early 1950s all the school lights were provided by acetylene gas that was made on-site. It was often described as poor quality and rather smoky.

The light quality was so poor in fact that the girls tell a story of one of the teachers preparing for bed and accidentally covering her face in boot polish rather than face cream. You can imagine the howls of laughter when the pupils spotted the mistake!

Whilst some of the school lights were changed completely from the gas fittings shown in Senior Study Rooms postcard (SMP.24.2.69), we are very lucky that they adapted the gas mantles in the chapel so we still have the beautiful ornate fittings over the stalls (PC.24.02.280a).

As you can imagine, there was much excitement when the girls returned in September 1950 to find electricity was being installed at the Priory. It quite inspired their creativity - although from reading their poetry you can see that the installation was not without some issues!

The lead photograph some the substantial complex of buildings that were the gas works and they show just how much work went into producing the gas. It is easy to miss the ruins these days, that are situated att he bottom of the Sixth Form Lawn.

The man in the photo is a bit of a mystery and we are still on a mission to find out more information about him - even if it is just his name. If you can shed any light (no pun intended) then do get in touch you can email oldprincethorpians@princethorpe.co.uk. 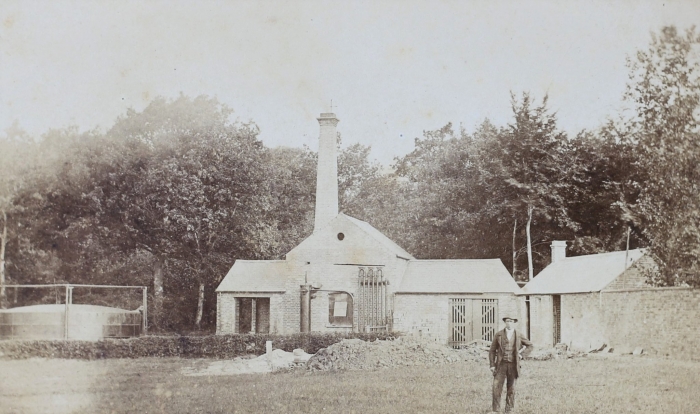 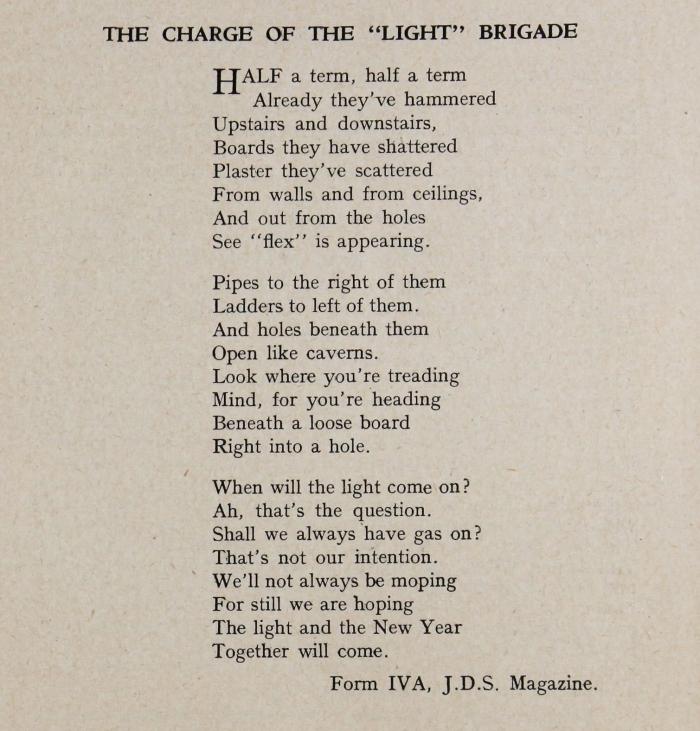 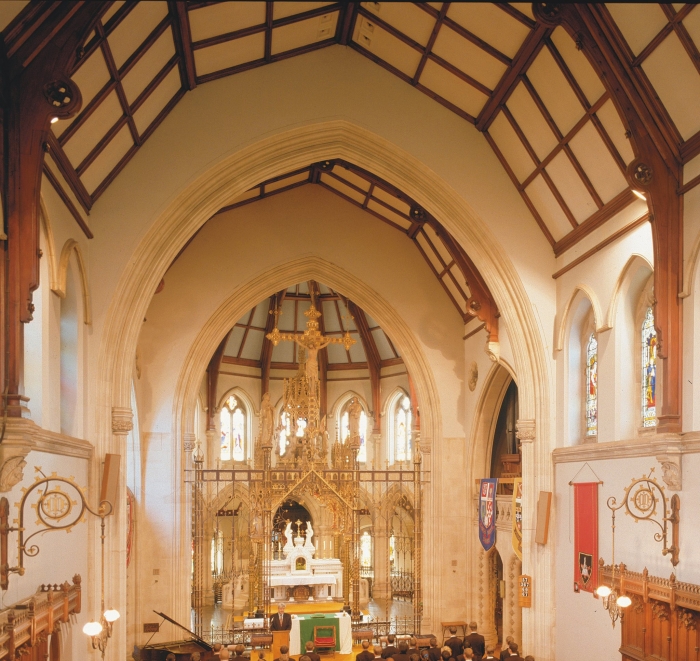 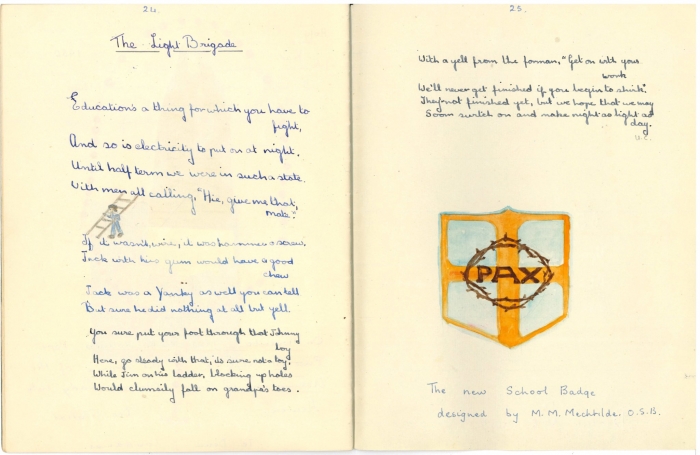 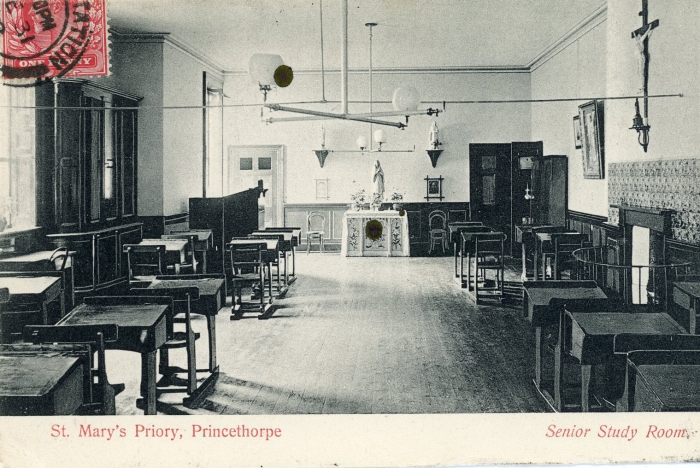