Congratulations Rachel And William And A Warm Welcome For Leo

Rachel Edjenguele (Ogrizovic) has many fond memories of her time at Princethorpe College where she made many life long friends.

Since leaving Princethorpe she has studied at Birmingham City University and then trained to be a primary school teacher.  Subsequently she worked at a school in Coventry for many years, leading the maths department.

Last June she married her husband William and they have now relocated to Scotland where he is a professional footballer currently playing for Dundee United.

On 22 January 2018 they welcomed their beautiful son Leo Emery Edjenguele into the world, weighing 8 1/2 lbs, and Rachel is currently enjoying being a mummy!

We were so pleased to hear from you Rachel and our best wishes for a fun filled future! 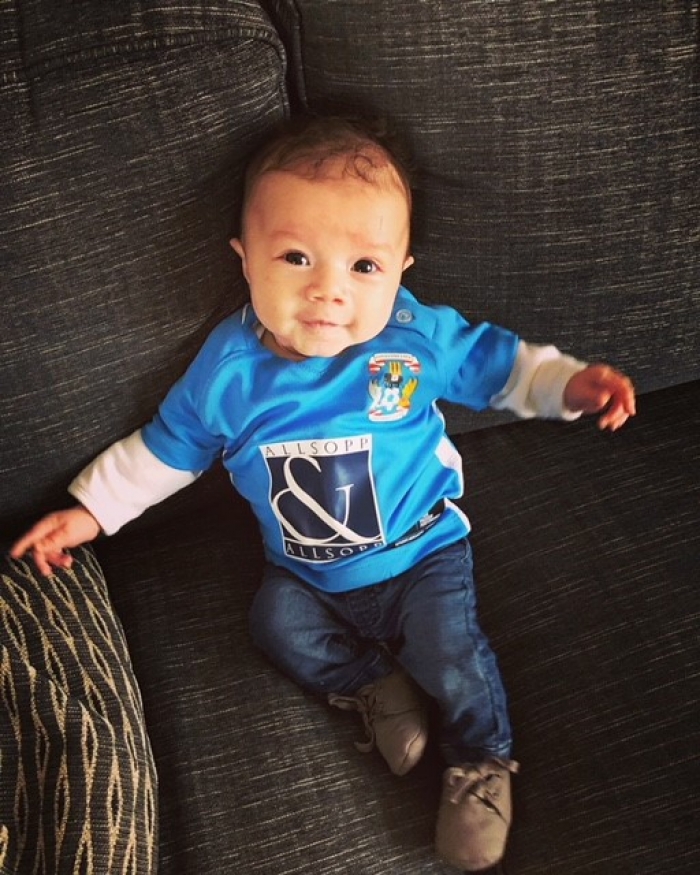 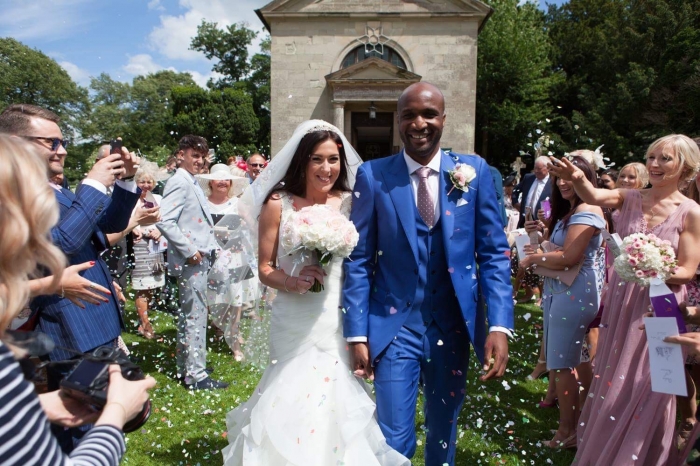 Back in March the Old Princethorpians learned of the passing of Fr Sandy Murray MSC on Sunday 11 March. Fr Sandy taught at the college in the 1980's for about two years.  His funeral took place in St Albans on Thursday 6 April.

The following is taken from his funeral programme.

Fr Sandy’s life can be seen as a mysterious, sometimes painful, journey of faith.  Born just before the outbreak of the Second World War, and educated at Inverness Academy, he worked in local government for some years.  His family was staunchly Presbyterian, and his sister Avril remains a very active member of her local Presbyterian church near Adelaide; but during his twenties something moved him to go beyond his early religious experience. He took the brave decision to become a Catholic.

He continued his mysterious journey of faith when he began to consider whether God might be calling him to be a priest. With this in mind, he went for further studies at Drygrange, near Edinburgh, during the late 1970’s. Around this time Fr Dan O’Connor MSC began to make contact with him. Fr Sandy joined the MSCs in 1981 completing his Novitiate in Moyne Park, Galway. After his First Profession he studied Philosophy and Theology at Milltown Park in Dublin. Two pastoral assignments followed in Killinarden Parish (Dublin) and at Princethorpe College (Warwickshire), where he was ordained Deacon. On 26th October 1989, at St. Mary’s Church, Inverness, he was ordained Priest. After another short period at Princethorpe, he was appointed to St. Albans. Almost all his ministry as a priest has been spent there.  The first phase of his ministry was very active; the second phase, much more passive and dependant, has its own mysterious value.

Fr Sandy is fondly remembered in St Albans as someone who was always on the go: beetling around in his car, running hither and thither with his distinguished white mane of hair flying.  His experience of becoming a Catholic proved invaluable when he led the R.C.I.A. programme.  By all accounts he ran a very tight ship: no one was allowed through until all procedures had been duly observed. Many deeply committed, hard-working Catholics in the community are very grateful for the help that he gave them on their journey of faith. By all accounts his sermons were much appreciated; an article about the Journey to Emmaus that he wrote for the Parish Bulletin reflects his great devotion to the Mass.

Fr Sandy’s care for sick people and his compassion for the bereaved are still recalled with affection. His visiting area in St. Albans was centred on the Mercy Convent at Maryland, where there was also a Care Home and a Mass Centre. He enjoyed saying Mass at Maryland; the Sisters of Mercy and the people living in the neighbouring estates took him to their hearts. His sparring partner and colleague on the R.I.C.A. programme was Sister Immaculata RSM, usually known as ‘Mac’. Fr Sandy and Mac had a ‘love-hate’ relationship: Sister Joanna RSM says that they did crosswords together, but sometimes they also had cross words!

When he suffered his stroke in Inverness in 1999, the Maryland Sisters were among the first to make the long journey to visit him. He deeply appreciated their loving concern, although the hospital meetings were very upsetting both for them and for him. It goes without saying that the stroke turned his life upside down.  It was very frustrating for him to be acutely aware of everything that was going on and to understand it all, but to be unable to express his ideas and wishes adequately. Nevertheless, he developed a ‘code’ which his listeners tried to interpret with varying degrees of success! This included ingenious methods of alerting everyone to parts of his schedule that they might have forgotten!

Many characteristics were carried over from the old Fr Sandy to the new. His stroke did not deprive him of his sartorial sensitivity: he continued to be a very dapper dresser.  He had kept his dry sense of humour: when an old Italian Nun sorrowfully told us that she had to retire and return home, he responded: ‘that’s very good!’  We could never work out whether he was making a deliberate mistake!

Fr Sandy continued to sing as well as he ever did, remembering all the words once he got started. Many mornings at around 6.30am he could be heard singing: The Bonny Bonny Banks of Loughloman; Scotland the Brave; I Will Take You Home Again Kathleen; Flower of Scotland; and many many more. One morning he was heard singing a duet with his carer: I Could Have Danced All Night.

When he joined the Missionaries of the Sacred Heart, he could never have anticipated that his journey would have taken him in the direction it did. In his own special way, in joy and suffering, he continued to reveal one unique human face of Jesus.

One of the great joys for Fr Sandy was that he was able to remain in the MSC community. Thanks to the care and support that he got from the community, his carers, staff and his friends, he was able to live out these last years of his life in a place that he loved and was able to enjoy many special occasions. It was not always easy for him, and there were a number of times that he was frustrated, however, after a short time he would soon recover and get back to his cheerful challenging self.

Great credit should be given to all the members of the MSC community that gave such care and attention to Fr Sandy for many years. He deeply appreciated it and he was able to live out his life in the parish community where he ministered for so many years. Even though they were working in a very busy parish, members of the community still had time to get his supper, bring him shopping and on trips, sit and chat with him. One had to learn what was meant by: ‘’Thing a may’’ ‘’You know’’  ‘’Very good ‘’ and defiantly ‘’NO’’.

Over the last six months Fr Sandy’s health deteriorated and the death of Fr Tom Hewitt in January brought a great sadness to him and he shed many tears for his friend and community member.

Today our prayer is that they both are reunited in the loving presence of God.

May Fr Sandy rest in peace. 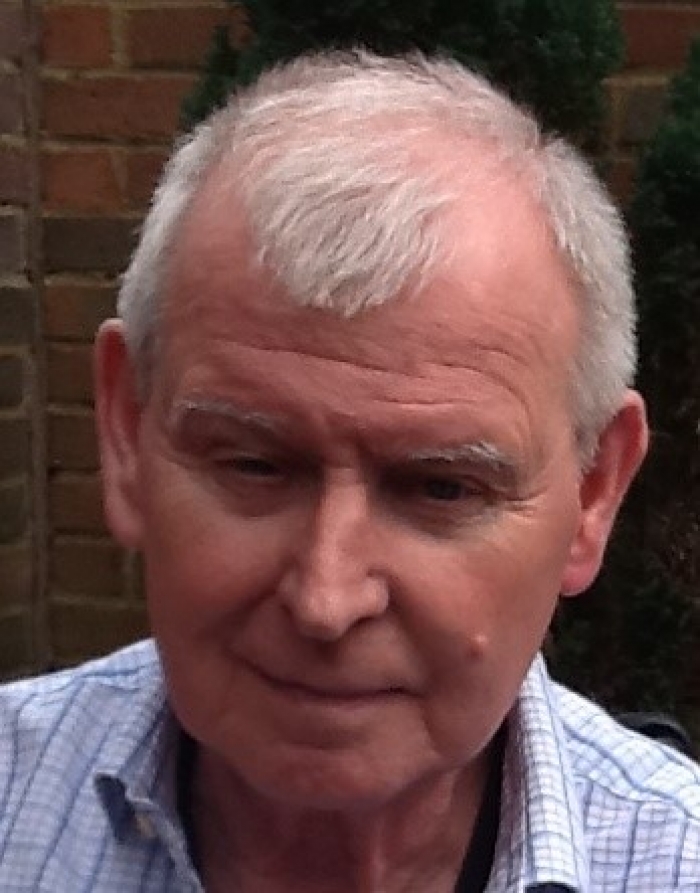 Congratulations to sisters Nichola and Rosanna Brown who are both set to tie the knot!

Nichola left Princethorpe after Sixth Form in 2008 and now works as a clinical nurse specialist in palliative care in central London. She recently got engaged in Mallorca to Michael Tame who is a surveyor based in London. The happy couple, pictured, are busy planning their wedding for May next year.

Sister Rosanna, who left Princethorpe in 2009, has less long to wait as she is getting married this weekend to Chris Martin, the pair both work in the Metropolitan Police Force and we hope to share a picture from their big day in the next issue of the OP newsletter! 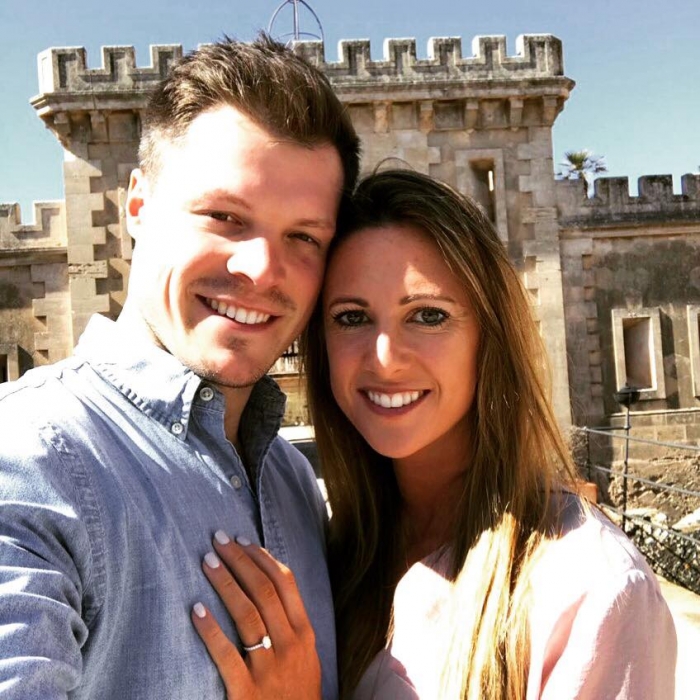