Brian Lewellyn's Return To Princethorpe Sparks Many A Memory

I now live in southern Ontario with my wife Judith and two children Emma, 15, and Christopher, 14, working as an agricultural consultant in the dairy industry. I started at Princethorpe back in 1980 and left after O-Levels in 1985 to work on the family farm near Rugby. Over the next few years I attended agricultural colleges in Northamptonshire and then Leicestershire before returning home full time to farm in 1989. (My brother Ivor followed a similar path through Princethorpe but three years later). Facing the prospect of our rented farm going for development, we looked to relocate to Canada and in 1998 Ivor and I purchased a dairy farm in Manitoba. My wife, Judith, who I had met two years previously in England, followed us out after we got married in 1999.

2009 saw us take a life change again and the Manitoba farm was sold, Judith and I relocated to southern Ontario with our children where we have a hobby farm and a Bed and Breakfast, October Sunrise Farmhouse B&B. I work for Grand Valley Fortifiers, as an agricultural consultant serving and advising dairy farmers. My children Emma and Christopher attend school locally in Orangeville.  My brother, Ivor stopped in Manitoba and develops property in Winnipeg.

I often think back with fond memories of my time at Princethorpe, so during a recent family vacation staying with my parents, I contacted Princethorpe  to see if I could take my children back around the old school. Two phone calls to, OPs Secretary, Melanie Butler later, a time and date was set.

Driving from Bilton to Princethorpe on a spring March morning brought back a flood of memories, with the sight of the church spire towering over the surrounding landscape.  In those days most students from Rugby, Bilton and Dunchurch usually came by bus driven by Fred Marvin, or a brother of Fred, or son of Fred, I believe also called Fred. Our bus was different –  as it pulled up alongside the larger newer busses at school, it looked as though it came straight out of a St Trinian’s film. Much older, rounded and less square, always immaculate and Fred always adding a little colour to the trip solving all the world’s problems in minutes after listening to the Radio 4  8 o’clock news.

I entered form AP, my form teacher being Mr. Philpot. Looking back, some of my first year teachers were some of the pillars of the school throughout my five years at Princethorpe. Mr. O’Grady, our first year maths teacher, I’m sure is fondly remembered by all. His humour, patience, temper and disciplinary measures can all be only described as unique. The diagonal line at the top left corner of the chalk board with the numbers 2,4,6 etc. being added for additional home work when class behaviour was amiss. The last day of each term we always had fun with his “O’Gradyisms” – riddles, stories, puzzles, wrapped up in his own sense of humour, and asking if anybody’s mother would like to go on a hot date with him. For years he worked the dinner lines, misbehaviour being met with a quick thick ear.

Sister Helen Morgan taught religious education and I believe geography. She was always patient and understanding but had, as all of the nuns and priests at the time, a very no nonsense approach and set lots of home work. Mr. Cooper, Price, Hopwood, Rex, Darkes, Mrs. Carpenter amongst others all played a part in the building of our characters that would see many of us working across the country and the globe. A special mention must go to the ladies who tried for three years to teach me French, your patience was amazing but I do think seating three farmers sons, myself, Guy Minshull and Allan Thomas, together, was a huge mistake. By 1983 we already had Brexit completely planned. The yearly day trip to Boulogne was an unforgettable experience, probably not for all the right reasons but character building indeed, even for the teachers. P.S. when searching the train, the booty was in the French Bread.

So Melanie, thank you so much for those three hours you spent with us in March. After nearly 30 years away from Princethorpe it is fantastic to see how the school has matured into a bright, energetic place of learning. There seemed to be a wonderful rapport between the pupils and teachers. The grounds and buildings were immaculate, the sports fields pristine. Great to see the school in such great shape making memories daily for 900+ students.

Pictured is Brian, his children Emma and Christopher and his mother Vivian in the Quad on their visit to Princethorpe. 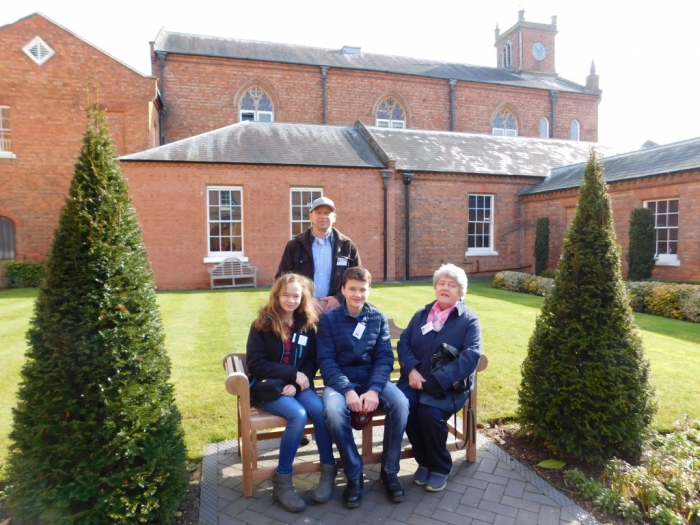